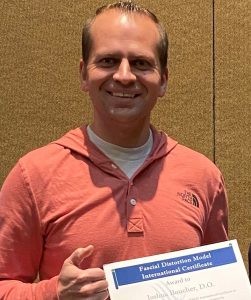 Joshua Boucher, D.O., is an osteopathic physician who received a bachelors in Biology from Utah State in 2012 and later graduated from Des Moines University in 2016. He was awarded a full ride scholarship to medical school through the Health Professions Scholarship Program which required him to serve 4 years in the army after finishing residency. In 2019 he graduated from family medicine residency from Dwight D. Eisenhower Army Medical Center. That same year he became boarded in family medicine and as Captain in the U.S. army, became the Medical Director, Office in Charge, Pain Champion and has mentored many military providers in the FDM. He is adjunct faculty at the Burrell College of Osteopathic Medicine and is incorporating the FDM into their curriculum. He is a Director At Large for the American Fascial Distortion Model Association where he leads the research committee. He has published several medical articles with his latest published in the Journal of Alternative and Complementary Medicine named: Manual Therapy Informed by the Fascia Distortion Model for Plantar Heel Pain: Results of a Single-Arm Prospective Effectiveness Study.